Right from the start, I felt respected.
I was given good advice so that I could make choices
that corresponded to my values. 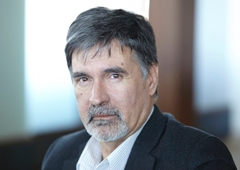 We brought the concept of pre-arrangements to Québec in the 1960s. Today we are pleased to continue to offer clear explanations and detailed responses as our commitment to you.

It is a contract that guarantees that upon your death your estate will obtain the funeral services that you have chosen upon your death. By signing your contract, you pre-arrange the type of ritual and burial you want.

Here are some examples of cases where civil status may give rise to problems when a death occurs:

John
SINGLE, WITHOUT CHILDREN
Newly retired and with no children, John is completely free to pursue his passion for culture and travels to foreign lands. He chose to make pre-arrangements so that his brothers and sisters would not have to deal with the eventual worries of organizing his funeral. As their lifestyles are very different from his, the pre-arrangements also let him specify the types of rites he wants. The music, the readings and the setting will all be in the image of this sophisticated gentleman.

Nicole and Ted
COUPLE WITHOUT CHILDREN
Nicole and Ted have just moved into a residential complex for autonomous seniors. At 69 and 72 years old, respectively, they are both in good health and lead active lives. But for how many more years? As they have no children to take charge of their affairs when they die, Nicole convinced Ted to make pre-arrangements. That way, when one or the other dies, or if both of them die at the same time, everything has been decided and paid for. Now that it’s done, they have peace of mind and can concentrate on their next golf season.

Robert and Johanne
COMMON-LAW PARTNERS
WITH CHILDREN
Robert and Johanne live with their three minor children in a quiet neighbourhood in the greater Montréal region. Not married? What does it matter? They have a stable family life and a harmonious relationship. Nevertheless, if one of them were to die, the other would be unpleasantly surprised to discover that, under the law, the surviving partner would have to deal with the other’s family. Robert and Johanne both get along with their mothers-in-law, but with pre-arrangements, they would not have to deal with unnecessary stress at the time of the funeral.

Michael
DIVORCED, NO WILL
After his divorce, Michael started a new life with Sonia, with whom he has been living for four years. His underage son, born from his marriage, gets along well with his new partner, Michael has shared custody with his ex, and everything is going well. However, Michael is a very busy entrepreneur who is not afraid to admit that he sometimes neglects his paperwork. Sonia discovered that if Michael were to die while his son was still a minor, it would be Michael’s family who would, according to the law, be in charge of the funeral arrangements. Sonia would have no right to take part in decisions made by his family. She therefore suggested that he make pre-arrangements, and she now feels confident that interfamily relationships will remain cordial.

Steven and James
COMMON-LAW PARTNERS
Steven and James are a happy couple. While they could marry or enter into a civil union in Québec, where they live, they chose to simply live together, without signing any agreement or writing a will. They were under the impression that by living together for long enough they would be considered as a married couple under the law, and if one of them were to die, the other could ensure that his wishes would be respected. James’ mother, who knows better, told them that it is the legally designated heirs or those who are legally entitled to inherit who make those decisions if no arrangements have been made. Common-law partners are not considered to be heirs and are not entitled to inherit under the law. After talking it over, they concluded that making pre-arrangements was the solution.

Yes, because with a pre-arrangement contract, the important decisions will have been made beforehand. Also, at the time of death, the survivors will not need have to think about it. Call us as soon as possible. We will be pleased to put you in contact with a MEMORIA counsellor who can answer your questions and who can help you prepare and organize your plans.

Yes, you can have signing authority for a pre-arrangement contract on behalf of a loved one.

The advantages of pre-arrangements

When you sign your pre-arrangement contract, you pay an amount for the services you have requested. The price for whatever you decide when the contract is signed is frozen and cannot be changed. This means that the services selected will be delivered at the price in force at the time the contract was signed.

The funeral home with whom you have made a pre-arrangement contract is obliged to annually index the amounts you have paid sheltering the costs from increases in the cost of living.

Most of it—90%—of the amount paid by you to MEMORIA will be placed in trust, in an institution, sheltered from inflation and you will be protected from all eventual increases. It is an appreciable advantage that guarantees your money.

You have the choice of paying in full when you sign your pre-arrangement contract, or paying through monthly interest-free instalments. MEMORIA is committed to always providing the most flexible and considerate terms of payment.

You can make changes whenever you want to as to your choice of funeral arrangements, or to correct the information contained in your pre-arrangement contract.

Your pre-arrangement contract can be changed at any time.

If you choose to cancel your pre-arrangement contract, MEMORIA will reimburse you 90% of the amounts paid, including the interests accrued on those amounts.

This is a legal requirement and MEMORIA guarantees that it will be respected.

Yes they can, and when you die, we will help your heirs with the administrative formalities to obtain it.

Should you find yourself unable to continue making payments, MEMORIA will help you, for example we can suggest other terms of payment better suited to your situation. This is an advantage for you, because, unlike insurance companies, for which a missed payment may mean an automatic cancellation of your coverage, your pre-arrangements always remain valid, even if you ask to change the terms.

Take the time you need to think it through, explore options, and ask questions. You can trust our counsellors, who are true resource people.

Unlike a notarized will, our pre-arrangement contract is readily accessible immediately after death, so t successors can quickly be informed of your wishes regarding funeral arrangements.

Warning! Having a plot only refers to internment. Your pre-arrangement contract includes information and instructions on all aspects of the funeral service and tribute including the choice of internment or cremation, the reception, the type of service, the obituary and many other details related to the organization of the funeral.

Just let us know in writing and we will make the necessary changes.  At the same time you should also request new “Please Notify” cards.

You should provide “Please Notify” cards to people you choose with instructions to notify us when and if the time comes. You may also provide us with a list of names and contacts that you would like us to advise in the event of your passing.

Please Notify cards- we provide you with plasticized cards with your contract number and our telephone number and address. You can give these to your loved ones or to the staff at the residence you live at.